Answers to the questions about our products and policies.

What is the difference between Citric Acid and HCl?

Citric Acid is a weak acid. It is used commonly in many food products as a preservative, and as a sour flavoring agent. It will not dissolve flesh at high concentrations.  We use  organic FCC/USP (Food Grade) citric acid derived from Cassava Root. Most citric acid is made from GMO corn crops.

Hydrochloric Acid (HCl) is the same acid present in digestive enzymes in our stomachs. It is not sour, and can dissolve flesh at high concentrations.

Most is derived from Bovine stomachs and sold as Muratic Acid at the hardware store, but ours is chemically derived and is also FCC/USP grade,

The citric acid at 50% strength, and HCL at 4.375% strength produce the same amount of chlorine dioxide when mixed with Part A.

What is Chlorine Dioxide?

Chlorine Dioxide is a small, volatile molecule, that reacts with other substances by means of oxidation. It exists as a greenish gas at normal temperatures. Because it is a gas, chlorine dioxide cannot be safely transported in large quantities. Chlorine dioxide is usually generated on-site as needed by mixing precursor chemicals. 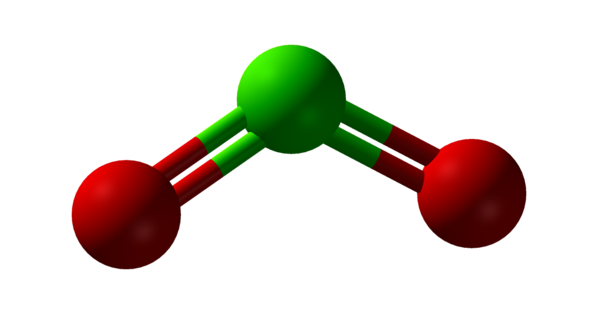 Chlorine dioxide is used everyday in food service, municipal water, mold treatment, odor treatment, medical use, mouthwashes, toothpastes, eye-care, and personal water treatment products, among other applications.   It is also considered to be a more earth friendly alternative to many chlorine applications..

If it only exists as a gas how can I use it?

Chlorine Dioxide has a lower oxidation strength than chlorine, but more than twice the oxidative capacity.  Reduction/Oxidation Strength or "Redox" is a measure of how strongly an oxidizer reacts with with organic material, the higher the redox potential, the more substances the oxidizer will react with. Chlorine Dioxide has a lower redox potential than ozone, chlorine, or hypochlorus acid.  Because of this lower redox potential, Chlorine DIoxide is more selective in what it reacts to.
Typically Chlorine DIoxide will only react with compounds that have active carbon bonds, sulfides, cyanides, and compounds with reduced iron or manganese. Chlorine has a higher redox, and will react with a wider range of compounds, including ammonia.  Because of this difference Chlorine DIoxide does not create toxic by products like chlorine does. This is why Chlorine is limited as a biocide in it's overall effectiveness as opposed to Chlorine DIoxide.

The higher oxidation capacity means that Chlorine Dioxide will remove 5 electrons from the target, whereas chlorine replaces 2.  Chlorine will bind to a pathogen, and other chemicals and compunds that may be present.  Chlorine DIoxide being more selective, will not  bind with other compounds.  Because of this capacity, Chlorine Dioxide is more efficient than Chlorine, Ozone, or Hypochlorus Acid when used as a disinfectant.
After the reaction is complete, Chlorine Dioxide reverts to chloride (salt). Chlorine forms Tri-halomathanes from reaction to ammonia, plus other byproducts from other chemicals and compounds as may be present.

If chlorine dioxide is a germ-killer, why don't you advertise it as such?

In order to make claims that your product kills germs, you must be registered with the EPA as a pesticide.
Our products are offered for surface cleaning, deodorizing,and similar household uses, as well as oxidative applications.
We do not have EPA registration, so we cannot offer any product with claims to sanitize or disinfect.

The FDA does not recognize sodium chlorite or chlorine dioxide as a nutritional supplement, or a medicine.
We absolutely cannot discuss any medical condition, or instructions for human ingestion. Please do not ask.

I thought it turned dark faster than it does. What's up?

Most often it has to do with what type of sodium chlorite is being used.

We use only EPA registered sodium chlorite. It is more highly regulated than sodium chlorite intended for industrial use.
Industrial Sodium chlorite is the easiest to find. It also costs quite a bit less than EPA registered chlorite. A lot of it is manufactured in China, and distributed through chemical supply companies. The main uses for this are pulp bleaching, oil field use, and other applications in which the killing of pathogens is not the primary goal. Industrial grade Sodium Chlorite is usually quite high in Sodium Chlorate (NaClO3) and Sodium Hydroxide (NaOH), and buffered with common salt. Industrial Grade sodium chlorite can also contain a high amount of lead, mercury, and arsenic. When used to make a solution, industrial grade chlorite will be cloudy for awhile, often requiring to sit for a day or two before it clears. Brown sediment is visible on the bottom, and a foam may remain on top until you skim it off.   Solutions made with industrial grade sodium chlorite may seem to activate "better", turning a dark amber quickly. This is due to the Sodium Chlorate producing both Chlorine Dioxide, as well as Chlorine, and other chlorine compounds. Turning dark faster does not necessarily mean more Chlorine Dioxide.

Other factors can include the amount being mixed, the vessel it is mixed in, ozonated water, UV, and ambient light.
1 oz will appear darker than 3 drops, even when mixed at the same ratio.

How is your CDS made? Why is it different than CDH or CD Kits

Our CDS is a very pure chlorine dioxide gas absorbed into water. Our entire system is made of laboratory glassware with glass fittings, and PTFE tubing. We use a proprietary method and stoichiometric ratio, It is a forced air system with 3 scrubbers to remove free chlorine and HCl gases that are present in the initial release of gas from the reaction of Sodium Chlorite with HCl . The reagent chamber uses only heat distilled water with no ozone, chilled to ≤ 42F.

Our method and ratio produce an aqueous chlorine dioxide solution between 5000 and 6000 ppm. We test using the  DPD method Colorimetry test, and dilute to strength.  Our system produces 99+% pure CLO2. It degrades at a slower rate than products made by direct infusion or activation, due to impurities being removed in the production process.

Whats the difference between a CD Kit, CDH, and CDS

CDH is acidified sodium chlorite. It is simply a premix of the combined drops at a much weaker concentration.  It isn't as economical, and the shelf life is greatly reduced. It takes 20 times as much CDH to produce the same result as the CD Kits. The only advantage is convenience.

CDS is aqueous chlorine dioxide. It is pure chlorine dioxide absorbed into distilled water. There is no chlorine dioxide in reserve and.It doesn't contain acid. It is bottled at 3000 ppm to allow limited quantity ground shipments. The process for making it correctly requires more equipment, time and steps than the others.

Why can't you send it to a PO Box?

Chlorite solutions, and HCl are considerid hazardous by the U.S.DOT They can only be sent ground, as a consumer commodity packaged for the end user. This is what the affixed sticker signifies.

Why is my DMSO is solid instead of gel or liquid.

No need to be alarmed. Remember, not every chemical or element  melts and freezes at the same rate and temperature.  DMSO has a melting point of 66.2° F (19° C). this means it crystallizes or "Freezes" at 66.2 F

In the winter time , you may receive your DMSO and find it to be a solid mass. This is normal in the case of DMSO. We are in Florida, and occasionally our DMSO is received below melting temperatures. DMSO cools rapidly, and thaws slowly. Just place it in a warm spot and let it thaw out.

What are your shipping Policies?

When you place your order, it will be queued for production and shipping the next day. Please be advised that your order may not ship until the following business day.

KVLab ships in compliance with regulations set forth in 49 CFR §172.101 Hazardous Materials Table. The following products have been reclassified as a consumer commodity and may be shipped in limited quantities via ground only. No delivery available outside of the 48 continental United States.

NOTICE: If any of these products are ordered with a PO Box as shipping address, we will attempt to notify you via the email associated with the order. If we have received no reply within 3 days, your order will be cancelled and authorization will be voided.

Other products may be mailed, unless accompanied by the products listed above

We make all of our Chlorine Dioxide products in daily batches and do not keep these products on the shelf.Orders go into production the following business day, and shipping labels are printed. Your order may go out that ihat day, or the next business day, depending on size of daily batch.

Can't subscribe you right now. Try later
Thank you for subscribing to the newsletter! We hope you enjoy shopping at Keavys Corner LLC
None of the products or statements made on this website have been evaluated by the U.S. Food and Drug Administration. None of the products or statements on this website are intended to diagnose, treat, cure or prevent any disease or condition. If you suspect you may have a disease or condition, you should consult a licensed healthcare practitioner. • Any incoming links to this website are unsolicited. Keavys Corner LLC is not responsible for any content or comments made on any external website or social media platform..